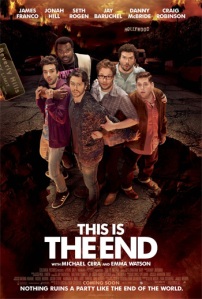 A lot of recent movies (and when I say recent I mean since the new millennium) have been giving different interpretations of what THE END looks like The Day After Tomorrow (2004), I Am Legend (2007), and 2012 (2009). Even a movie coming out later this month, World War Z starring Brad Pitt, showcases the rapid depreciation of human life.

This is the End is not quite like all the other apocalyptic movies. It’s Pineapple Express, the Exorcist, and Scary Movie all wrapped up into one gut-busting film. (I know it’s hard to imagine!) Laughter is inevitable in the directorial debut of Seth Rogen and Evan Goldberg. This is the End is based on Jay and Seth vs. The Apocalypse, a short film created by Rogen in 2007.

The best part of this movie review is that all the actors played themselves so I can save the 247 seconds of my life by not looking up that character’s real names. Any who, This Is the End is about six actor friends who barricade themselves inside a Hollywood mansion as the world slowly disintegrates around them. What started off as a packed house warming party at James Franco’s house, quickly escalated to a deserted evening. James Franco, Jonah Hill, Seth Rogen, Jay Baruchel, Danny McBride, and Craig Robinson question one another’s alliance and motives once food, water, and life necessities are bare.

Playing with God
I couldn’t really tell whether This Is the End crossed the line with biblical context in the story line. Halfway through the movie, Jay mentioned the Book of Revelations and how it referred to the end of the world suggesting that they were experiencing the apocalypse. I don’t want to spoil the movie but its consistent references to heaven and hell, the favor of God, and the goodness of humanity was delightful. I’m just not sure whether the movie mocked God and the bible or if it glorified His omnipotent power and grace.

Guest Appearances
Besides the dry satire, the movie had guest stars like Rihanna, Kevin Hart, Michael Cera, and Emma Stone. Most of them die because it’s the end of the world but it makes for a funnier movie. Rihanna solidified her adorable demeanor as she sang and flirted with the cast. Kevin Hart, who normally headlines his own movies, took a backseat and made a couple quick comedic appearances. And Michael Cera showed his behind (literally) before he quickly perished.

The Backstreet Boys
I loved the music in this movie! One moment I was rocking out to the Backstreet Boy’s Everybody and moments later I was reminiscing on Whitney Houston’s remake of I’ll Will Always Love You. Similar to the movie, the music selection was all over the place but surprisingly enjoyable. Some other notable musical mentions: Tipsy by J-Kwon, Paper Planes by M.I.A., and The Next Episode by Dr. Dre & Snoop Dogg

2.5 STARS: It’s funny…YES! But periodically it goes way LEFT just when you thought the movie was RIGHT! The cameos are the reason why I pumped it up by .5

If you don’t believe me, this is what other Pittsburgh Movie Scene Queen viewers thought of This is the End:

“It was hilarious and also had too much going on at some points. Alot of stuff was coming out of left field. Every time you thought the plot was over with more twisting things occurred!” –Angel Otuwa

“Hilarious! Although, I thought it was a corny flick, like Scary Movie, I really enjoyed it. I also enjoyed the biblical message in the movie. There was some truth to the underlying message about selfishness that stood out to me. Overall, good movie. “ – Tonia Charles