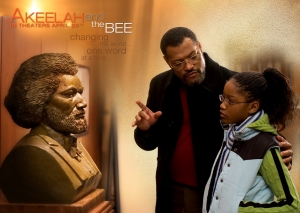 Akeelah and the Bee is an unforgettable movie about an 11 year old African American girl, Akeelah (Keke Palmer), who spells her way to the top. In a single parent home in South Central Los Angeles, there are a lot of odds against young Akeelah. Her public school is not equipped with the resources for her to succeed and she’s still dealing with the violent death of her father from years ago. Akeelah, who initially was written off, used her great memorization techniques and love for words and their games, like Scrabble, to win spelling bees.

Keke Palmer, who is now a beautiful young woman, captured all of our hearts in this movie. She’s definitely one of those Disney Channel kids, similar to Raven Symone, who had to act, sing and dance to cut it in the big leagues. She simply shined as Akeelah, not only did she star in the film but she also was featured on the soundtrack with her hit, “All My Girlz.”

Ike & Tina Turner Together Again
The 1993 tell all story about Ike & Tina Turner, What’s Love Got to Do With It, was the first time we seen Angela Bassett, who played Akeelah’s mother, and Laurence Fishburne together on the big screen. Who knew that 13 years later they would reunite for this warm tale about a little Black’s girl journey to win the Scripps National Spelling Bee. Only this time, the pair was not bickering and fighting but they were working together as Akeelah’s closest confidants to lead her to victory.

4 Stars: If you’re ever flicking through the channels and catch the Scripps National Spelling Bee on ESPN, count how many Black children are on the stage. This movie reminds us of our duty to expand our children’s horizon, to get them involved academically and scholastically.

From the root Latin word, “pulcher” which means beautiful

2 thoughts on “August Throwback Movie of the Month: Akeelah & The Bee”