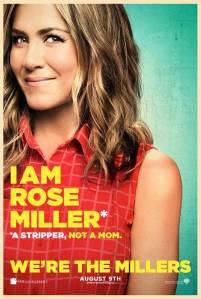 Deception is very tricky and it’s even tricker when you take a low budget stripper, a drug dealing 30 year old, a homeless teen girl, and a nerdy naive boy and try to turn them into an all-American family. We’re the Millers tells the story of one man’s desperate attempt to repay a local businessman. In return for being robbed of $40,000 worth of marijuana, which belonged to Brad Gurdlinger (EdHelms), David Clark (Jason Sudeikis) has to retrieve a big drug shipment in Mexico and bring it back to the United States safely.

David knew the only way he could successfully complete this mission was if he poses as a happy family on vacation. First, he has to find a convincible family. After a small search, he lucks up with a family that’s rough around edges but laced with grooming potential. His son, Kenny (Will Poulter), is really his next door neighbor who’s still a virgin and shy around women. His daughter, Casey (Emma Roberts) is really an alley-living street kid. And his wife, Rose (Jennifer Aniston), is really a stripper who needs an extra gig.

The family construction is the easiest part because once the deal goes bad, it’s up to the fictitious family to deliver the drugs and grab their monetary cut.

Jennifer Aniston has completely blossomed since her days as Rachel on Friends. She isn’t confined to her innocent roles anymore and she shows how flexible she is, literally, as she portrays an exotic dancer. Clearly filled with spontaneity and humor, Aniston made you believe she was a cheap stripper. In this movie, she is controversial, classic and lovable.

This movie has no filter for I’ve seen some things I’ve never even imagined. We’re The Millers is packed with dirty, sick jokes yet it warms your soul to see a fake family become a real one. We’re The Millers also plays a beautiful homage to the late, great member of TLC, Lisa “Left Eye” Lopes, by playing her rap verse from their 1994 hit, Waterfalls.

4 Stars: We’re the Millers is raunchy and provocative but much needed giggles from beginning to end!