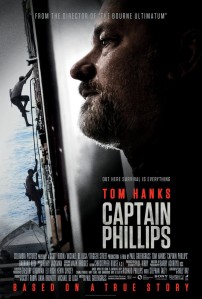 Like many other movie critics, I’m falling in line to say “Captain Phillips” is one of this year’s best movies. Captain Phillips, based on a true story from 2009 headlines, is an action-packed tale of a group of Somali pirates who takeover a US container ship, MV Maersk Alabama.

Captain Phillips (Tom Hanks) is on a tight schedule to deliver 17,000 tons of cargo to Kenya. Ignoring several advisories to stay clear of the Somalia coast, Phillips still managed to get on the radar of 4 Somali pirates. Led by a frail, focused Muse (Barkhad Abd), the African bandits took the 20-person crew and ship hostage looking for riches and gold. When the heist comes up short, the armed men take veteran seaman Phillips instead.

Tom Hanks has had a seasoned career and is clearly capable of carefully choosing his craft. With his role as Captain Phillips, describing him as brutally brilliant would be an understatement. Packed with a couple of middle aged pounds, Hanks plays the distressed, lost man all too well (“Forrest Gump” and “Castaway”). But even as the bad guys, the four young African men who played the pirates really stole some of Tom Hanks’ shine. Barkhad Abdi, Barkhad Abdirahman, Faysal Ahmed, Mahat Ali are young, fresh new faces that have emerged. Their dingy hungry mannerism, branded brotherhood and intense criminal escapade heightens the movie’s superiority.

If you haven’t already done so, I recommend that you read up on the real Captain Richard Phillips, who wrote a book about his hostage situation in 2010 called A Captain’s Duty: Somali Pirates, Navy SEALs, and Dangerous Days at Sea.
In addition to the movie coverage, Phillips is still featured in recent news. This December, Captain Richard Phillips will be a witness in a lawsuit filed by some MV Maersk Alabama crewmembers against the shipping company citing that they ignored previous warnings about the dangerous pirated-infested waters to save time and money on the trip.

Have you noticed that significant moments in U.S. History have quickly made its way to the big screen lately?
The movies about Malcolm X, Medgar Evers, and Rev. Dr. Martin Luther King, Jr. did not surface until years after their assassinations and civil rights work. Now, significant, newsworthy stories are being reenacted or adapted into movies shortly after they occur. For example, NBC and Dick Wolf’s Law and Order: Special Victims Unit episode that tried to kill two birds with one stone for its take on Celebrity Chef Paula Deen’s racist outbursts and the racially-motivated killing of Trayvon Martin.

In the box office, “Fruitvale Station” earned an unexpected $16 million worldwide for its portrayal of Oscar Grant’s last moments. I hold advanced technology and social media awareness partially responsible for the quick turnaround. When social injustice occurs, people quickly migrate to social media and advocacy groups to voice our concerns and demand action ultimately making it an ideal topic for any screenwriter. Although it did not constitute as a social injustice, the story of Captain Richard Phillips’ mighty rescue and return on Easter 2009, gained international attention and made for a great hero story. In less than 5 years, the nautical narrative has already surfaced a bestselling book and major motion picture.

5 STARS: Surprisingly, the Somali Pirates stole the show! Movie goers expect Tom Hanks to bring his best, but the entire cast relived such a tragic moment and turned an unordinary story into a picturesque movie. 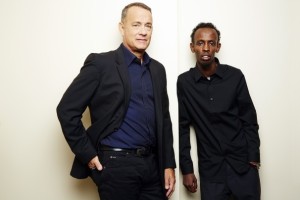