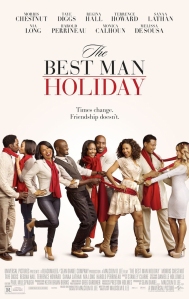 The issues from the first “Best Man” sadly spill over into the sequel. Jordan (Long) finally lands a beau, but that doesn’t stop Robin (Lathan) from believing Harper is still longing for his old friend. Lance (Chestnut) still holds the anger and betrayed emotional state from Harper’s night of passion with his wife, Mia (Calhoun). And Julian (Perrineau) and bachelor-party stripper, Candy (Hall) have to withstand the onset lurking of stuck-up, Shelby (De Sousa).

So many new things surface within this sea of friends too. The element of surprise is an understatement because the Best Man Holiday does not quite hold the fairy tale story line or epic Electric Slide conclusion like the earlier version.

The Best Men of “The Best Man Holiday”
All four men did an exceptional job, especially “Boyz ‘N The Hood” star Morris Chestnut. He has not aged and must be stricken with the Benjamin Button disease because there’s no way he is pushing 45. I’m certain the power of the camera and little bit of MAC makeup might have deceived my perception but Morris Chestnut looked amazing. Since the original “Best Man,” Chestnut has not made a lasting impression with his latest movies like “Not Easily Broken” (2009), “The Perfect Holiday” (2007), and “The Game Plan” (2007), but he has returned in this movie with a youthful, sprightly look.

Terrance Howard has had a busy year! Lee Daniels’ “The Butler” and “Prisoners” were both summer box office hits and Howard played vital supporting roles in both movies. Howard’s character is true to his outspoken, wild-humored self and he raised the bar on the stirring trouble in the company of his college buddies.

I was hesitant and skeptical to see this movie. After Tyler Perry’s “Why Did I Get Married Too,” I thought there was no hope for Black directors and their sequels. “Why Did I Get Married Too” had a dry plot and a surprise ending that was not conducive to movie’s sequence of events.
“The Best Man Holiday” initially had the same feel but Director Malcolm D. Lee transformed the movie with a strong climax and it turned out to be a remarkably impressive movie. I found myself crying (‘cause y’all know I’m a softy) as some of the movie’s shocking moments hit close to home.

The wait is officially over!

A very special shout-out to all of the Movie Scene Queen peeps that came out to the advance screening of the Best Man Holiday. Thank you!!!