The 71st Annual Golden Globe Awards took place this past Sunday, January 12th and before I start to dissect the awards show, please understand that I have never seen an episode of any of the TV shows nominated other than Scandal (and a few episodes of Modern Family). So let’s just talk movies (and a little bit of fashion)…

In the movie categories, all the winners were rightly bestowed a Golden Globe. I do not dispute any of the winning decisions. 12 Years a Slave, even with its graphic content and the unfair tale of Solomon Northup, it was more than deserving of the Best Motion Picture (drama) award. And the cast looked amazing, especially, Lupita Nyong’o…

She was absolutely timeless in her red Ralph Lauren Dress!

The other big winners at Sunday’s award show were Her for Best Screenplay, Frozen for Best Animated Movie, Gravity snagged Best Director for Alfonso Cuarón’s brilliant adaption of Sandra Bullock and George Clooney stuck in space, and American Hustle’s Jennifer Lawrence earned a Best Supporting Actress in a Motion Picture Golden Globe. I am officially not a fan of American Hustle but I can understand and appreciate the hype surrounding the movie.

Martin Scorsese’s The Wolf of Wall Street might be the only movie I did not see in 2013. Although I had several opportunities, I just could not find 3 whole hours to catch it! Nevertheless, The Wolf of Wall Street’s Leonardo DiCaprio walked away with the Best Actor in a Motion Picture (Comedy or Musical) award. And not to mention the filthy mouth award, with reports that the word “fuck” was used 506 times in the movie. I guess that’s my cue to actually see the movie.

Kerry Washington tastefully debuted her baby bump and made her first public appearance with new husband and retired NFL player, Nnamdi Asomugha. Washington has been giving us the Beyonce-Blue Ivy treatment with her secret wedding and pregnancy. I am so happy for the ABC sitcom star. 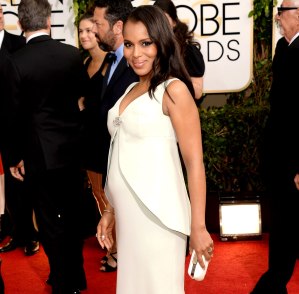 But secretly, I really want her to hurry up and have that baby so she can get back to Fitz! (Ok, just kidding)

From the waist up, Julia Roberts looked like a fancy restaurant host. I was not feeling the thick white collar shirt bursting out of her black strapless dress. And if that was a once piece, she should give it back IMMEDIATELY!

Here are the other actresses that should fire their stylists: Gabourey Sidibe, Jessica Lange, Tina Fey, Mila Kunis, and Heidi Klum.

Overall, I always enjoy this time of year because of the trifecta of award shows…next up are the Grammys and then the Oscars. Congratulations to all of the Golden Globe 2014 winners! For a full list of 2014 Golden Globe winners….

Best Actor in a Motion Picture, Comedy or Musical
Leonardo DiCaprio, The Wolf of Wall Street

Best Actress in a Television Miniseries or Movie
Elisabeth Moss, Top of the Lake

Best Actor in a Television Miniseries or Movie
Michael Douglas, Behind the Candelabra