Now that the dust has settled…

On Friday, February 28th, the New Pittsburgh Courier posted my Oscar predictions. This is the first time the MSQ covered the Oscars and publicly displayed any form of predictions. Some of MSQ’s most accurate predictions were Best Picture winner, 12 Years A Slave and Lupita Nyong’o for Best Supporting Actress. I was also 2 for 2 on Disney’s princess hit, Frozen; winning for Best Animated Picture and Best Original Song. (Sorry Pharrell!)

The diversity of the Academy Awards is not in the most ideal place, but it has evolved since inception in 1929. While Lee Daniels’ The Butler was catastrophically snubbed for not even being mentioned, 12 Years A Slave grabbed some big honors. And Lupita Nyong’o, fresh out of Yale’s School of Drama, had the biggest breakout role in decades. She effortlessly graces the red carpet with her fashioned presence and she’s become an iconic beauty.

I just recently had a debate with some colleagues about society associating her beauty with her success, assuming that no one would think she’s gorgeous if she didn’t have overwhelming success with 12 Years A Slave. To some extent, I agree. Yes, we idolize her because of her quick claim to fame, but her natural beauty magnifies our infatuation.

Jennifer Lawerence’s equilibrium is off balance because for two years in a row she has fallen at the award’s show. Get it together, Jenn!

“Precious” (Gabourey Sidibe), as I call her, let me down again with this red carpet appearance. Refusing to reward mediocrity, she has to find a stylist who will compliment her weight or she has to lose the weight. It’s pretty much black and white. She must fire her stylist and lose some weight.

Ellen DeGeneres is the most popular person in the World. She has literally become an American icon. She’s cute, funny, and culturally diverse. The award show’s ratings were the highest they have ever been. She broke a Twitter record, beating out the POTUS, for the most retweets ever! And anyone who can dress up in costumes, pass out delivery pizza, and mock her celebrity friends all in one taping is a pure genius. 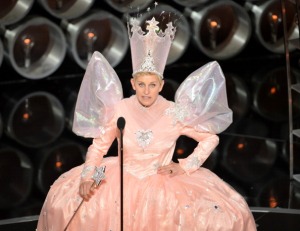 The picture that landed Ellen DeGeneres the Twitter world record:

I have a confession…

I have never seen Blue Jasmine or Dallas Buyers Club. And it’s not really a confession, but if you’re an avid MSQ reader, you will notice that I have never written a review on either movie. Based off of their Oscar winnings last week, I will watch the movies as soon as possible.

For my very first Academy Awards’ coverage, I had a rewarding experience via satellite from Pittsburgh, PA. What did you think of this year’s Oscars?