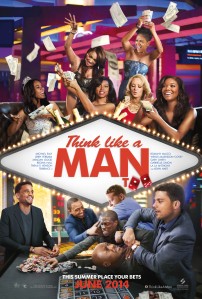 In the highly anticipated sequel, which was inspired by Steve Harvey’s best-selling book Act Like a Lady, Think Like A Man, all the couples are back for a wedding in Las Vegas. But plans for a romantic weekend go awry when their various misadventures get them into some compromising situations that threaten to derail the big event. The movie stars Kevin Hart, Michael Ealy, Meagan Good, Regina Hall, Taraji P. Henson, Terrence J, Gary Owen, Gabrielle Union, and La La Anthony.
Think Like A Man Too is in theaters June 20, 2014.

The advance screening will be held Tuesday, June 17th at AMC Waterfront 22, beginning promptly at 7:30PM. Please comment below with your favorite part of Think Like A Man (2012). In MSQ tradition, I’ll start with mine: My favorite part was finding out Kevin Hart’s nagging wife was Wendy Williams!