The Black students at Winchester University are back for their senior year in the final season of “Dear White People.” Starring Logan Browning and DeRon Horton, the Netflix series brings the tumultuous life of undergraduate studies at an Ivy League school to an end for Sam White and her friends.

The highlight of Sam White’s studies is her controversial student radio show, “Dear White People,” and her hopes to one day become a film director.

Logan Browning, who plays Sam White, has consistently portrayed a beautifully flawed college student. Her character’s wisdom and wit strokes even the nerdiest egos, while her sass and spunk create the Black Girl Magic we all fell in love with freshman year.

Sam White, who’s typically a pitbull in a skirt, is soft and vulnerable in this season as she meets her match with new student, Iesha Vital (Joi Liaye). The unlikely pair builds friction causing the gang to resolve some unspoken issues and fight to produce an all-Black variety show on a predominantly White campus.

As my mom would say, “What happens in this house, stays in this house.” So, when Black folks have a public disagreement, it almost lets White people pick out the weaknesses to capitalize on our dispute. These types of conflicts also take attention away from the true matter, delaying the work in progress.

The claim that some Black people are not Black enough or do not do enough for “the cause” is also a nasty setback to moving the needle forward. The Black student caucus at Winchester University faces all those things as Sam White and Iesha Vital rise as leaders of two different packs.

I will miss Thanksgiving with my family. I will miss getting dressed up to hang at my mom’s house, cracking jokes, and in the words of Uncle Phil, “Turkey with pillowy mounds of mashed potatoes, butter-drenched dressing. Tiny onions! Swimming in a sea of cream sauce.”

What about my cousin’s tradition of Black Friday shopping at the North Versailles Walmart? Last year, I almost clotheslined a woman for jipping the long line in an attempt to get a $98 flat screen TV.

All of those annual family traditions go right out of the window when the world’s deadliest virus is knocking on my doorstep. Who am I kidding? Coronavirus kicked in my door without a warrant and plopped right on my couch.

I don’t know where or from whom I contracted coronavirus, but I am fully aware of its path of destruction and the victims it has so carelessly left behind.

Since the pandemic started, I went straight into Power Ranger mode—the pink one, to be exact. I said to myself, “I can make a difference during these difficult times.” So, to date, I rescued over 600 pounds of food and delivered 518 meals with 412 Food Rescue, distributed 500 pairs of shoes to local children, supplied more than 8,000 students with bookbags and school supplies, and turned a typically small harvest party into a Homewood giveaway.

Ironically, with movie theaters closed, this pandemic has been good to your Movie Scene Queen, too. In April, we raised over $2,000 to provide immediate cash assistance to single parents. We became a registered trademark in August. Movie Scene Queen joined the African American Film Critics Association, creating a space to interview Spike Lee, Issa Rae, Nia Long, Jamie Foxx, Denzel Washington, and others.

All I want to do is help people, and now, I need to help myself. I am hoping and praying that in 14 days I am COVID-free, and equally important, I wish upon a star that I do not spread the virus to anyone I know and love.

Read more at the New Pittsburgh Courier, My review of ‘coronavirus’—Zero Stars! Two Thumbs Down!

As movie theaters across the country temporarily shut their doors in the wake of the COVID-19 pandemic, Movie Scene Queen was forced to make some difficult decisions as movie screenings are our bread and butter. We are teaming up with Revival Printing Company to help small businesses, like Movie Scene Queen, during these hard times.

We encourage you to purchase a t-shirt for only $20. When you purchase a shirt, $10 goes directly to Movie Scene Queen supporting our Single Parent Project. So, you’ll be supporting two local small businesses– MSQ and Revival Printing Company. 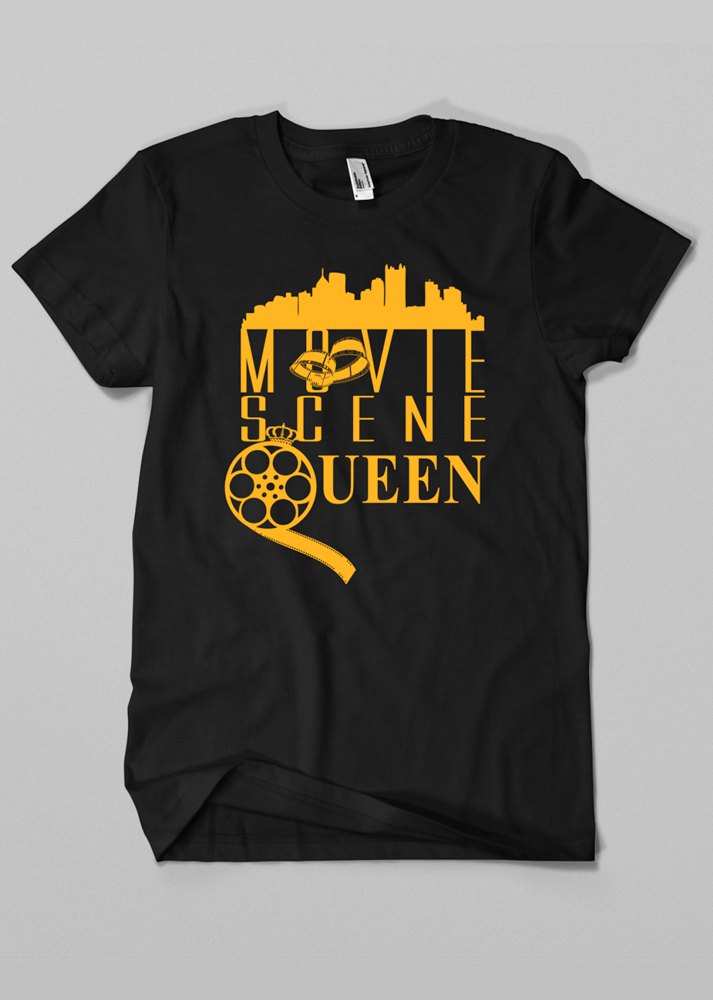 The first 50 people who purchase a Movie Scene Queen t-shirt will automatically be entered in a raffle to win a $50 Amazon Gift Card! The winner will be announced April 15th.

No taxes. No hidden fees. Free shipping. Shirts are available at https://www.pghtees.com/product/movie-scene-queen.
April 5, 2020 0

Following the deadly events at home, the Abbott family (Emily Blunt, Millicent Simmonds, Noah Jupe) must now face the terrors of the outside world as they continue their fight for survival in silence. Forced to venture into the unknown, they quickly realize that the creatures that hunt by sound are not the only threats that lurk beyond the sand path.

Movie Scene Queen and Paramount Pictures are hosting A QUIET PLACE PART II ADVANCE SCREENING. Please join us in Monday, March 16th at 7:30PM at AMC Waterfront 22.  Please comment below with your favorite sequel. My favorite sequel of all time is Home Alone 2: Lost in New York (1992).

What would you do if your abusive partner suddenly became invisible?

Trapped in a violent, controlling relationship with a wealthy and brilliant scientist, Cecilia Kass (Moss) escapes in the dead of night and disappears into hiding, aided by her sister (Harriet Dyer, NBC’s The InBetween), their childhood friend (Aldis Hodge, Straight Outta Compton) and his teenage daughter (Storm Reid, HBO’s Euphoria).

The Invisible Man screening will be held on Tuesday, February 25, 2020 at 7:30 PM. Please comment below with your interest. See you at the movies!

The first row of the balcony at an advance screening for “Harriet” at AMC Waterfront 22 in Homestead was filled with high school students from Allderdice, laughing and enjoying the evening out.

The laughter settled down once the movie started and the life of 19th-century abolitionist Harriet Tubman unfurled on the screen. They were absorbing the re-creation of a world they had missed by more than 160 years. Still, there was no denying the parts that resonated.

Merecedes J. Williams, aka Movie Scene Queen, looks forward to that moment of recognition. The social media project assistant for Pittsburgh Public Schools is also the movie critic for The New Pittsburgh Courier.

It was in her capacity as the Courier’s movie critic with access to free advance screenings that it occurred to Ms. Williams to make that opportunity available to Pittsburgh Public School students when it comes to films with educational value.

With the mission of expanding awareness of quality films for young people, Ms. Williams created the Movie Scene Queen entertainment blog seven years ago. Her goal then — as now — is to engage young people in discussions of films and to make free passes available to those in the Pittsburgh Public Schools who want to attend advance screenings.

On evenings when she is supervising a dozen or so students at a screening, Ms. Williams is also thinking about how to approach the movie critically and fairly as a reviewer. She’s both hostess and critic on those occasions, a burden she happily accepts many years into the gig.

The first movie she reviewed for the Courier was “Fruitvale Station,” the 2013 Michael B. Jordan classic about the killing of an unarmed and handcuffed black commuter by cops at a BART Station in Oakland, Calif.

“I thought, ‘Wow, how can I write about this?’” she said, recalling the tears streaming down her face when the movie was over. She fought her way through the sorrow to an evaluation of the film based on its aesthetic merits and social/political implications for African American viewers.

“This is much more than a movie,” she said of the film directed by Ryan Coogler. He would later gain even more fame as the director of “Black Panther,” one of the highest grossing movies of all time. “This is a film about unrepresented people who are being slaughtered by those who are supposed to protect and serve them,” she said.

Just as every superhero movie has an origin story, it was at that moment that Merecedes J. Williams became Movie Scene Queen.

There was so much educational value — painful as it was in a film like “Fruitvale Station” — that she wanted to play a role in exposing young people to that aspect of cinema culture.

“The idea was to stick with black films that predominantly showcase black actors, producers or directors,” she said. Early on, Ms. Williams also decided she had a social responsibility to bring things up in her movie reviews, even though it might cause some people to “look sideways at her” for being too preachy.

“It’s important to me to stay true to myself in every movie review, especially when I’m representing my opinion to a population I’m a part of,” she said of the Courier’s predominantly African American readership. “It’s a burden I’ll live with for the rest of my life as long as I’m black, female and writing.”

Read more at the Pittsburgh Post-Gazette, Sweat Equity: Merecedes Williams is ready for her closeup

The New Pittsburgh Courier’s film critic, Merecedes J. Williams, will celebrate seven years in business by being a guest bartender at Stanley’s Lounge in Homewood, 7403 Frankstown Ave., on Jan. 22 from 6 to 8 p.m. She will be joined by WAMO 100.1 FM’s Portia Foxx. All tips will directly benefit Williams’ Single Parent Project, an initiative that provides free movies, concessions and transportation to single-parent families, families with incarcerated parents, and foster families.

State Rep. Edward C. Gainey will present Williams with a state proclamation at Stanley’s Lounge to celebrate the business milestone and the corresponding community-based work.

In 2019, Williams distributed more than 4,200 free movie tickets, raised over $2,000 to send local high school students to see the movie “Harriet,” and sent 144 families to the movies via the Single Parent Project.

Dolittle stars Robert Downey Jr. with an ALL-STAR voice cast of supporting actors. After losing his wife seven years earlier, the eccentric Dr. John Dolittle (Downey), famed doctor and veterinarian of Queen Victoria’s England, hermits himself away behind the high walls of Dolittle Manor with only his menagerie of exotic animals for company.

Please comment below with the name of your favorite female hustler!