Two years after choosing not to kill the man who killed his son, former police sergeant Barnes (Frank Grillo) has become head of security for Senator Charlene Roan (Elizabeth Mitchell), the front runner in the next Presidential election due to her vow to eliminate the Purge.

For tickets to the June 28 screening, please comment below with your favorite The Purge moment.  The second Purge movie, Anarchy, was super crazy!  It was more intense and deadly than the first one.  Michael K. Williams was a straight beast!

In less than a year, Writer and Director James Demonaco brings forth the anticipated sequel, The Purge: Anarchy. The movie, starring Frank Grillo and Carmen Ejogo, fast forwards to March 2023 and it is time for the annual purge.

Five strangers, led by local police Sergeant Leo Barnes (Grillo), are stuck in the streets for 12 hours of crime-filled behavior. Even after taking necessary precautions hours before the Purge began, some families were still dragged out of their homes or sacrificed at the hands of wealthy citizens.

My main man, Omar from the Wire, was stirring political controversy as usual. In the Purge 2, Michael K. Williams was the anarchy. As Carmelo, leader of a rebellious group, he was determined to overthrow the New Founding Fathers of America.

Have you ever notice Williams never plays a soft role? He’s always so tough, vigilant and thorough. From guest appearances on Law and Order: SVU to 12 Years A Slave, I enjoy him in everything

The Purge: Anarchy plays out our deepest fears. The fear of innocently dying at the hands of another human being and the fear of non-protection. The Purge relinquishes all rights to be protected and served by local and national governments and creates an environment is senseless murder is justifiable. The life sacrifices during the Purge is clearly a false reality of cleansing sins and becoming whole again.

This movie series taps into an even bigger issue. The Purge, which is labeled as an event to reduce crime, actually eliminates the poor. The real horror is the government making the most disadvantaged citizens dispensable.

How does this fictitious movie reflect our own real-life local, state and national governments? Although we aren’t actively participating in the Purge, maybe we’ve subconsciously succumbed to it already.

Eric Garner, who was stopped for a petty crime in Staten Island on July 17th, was murdered by five NYPD officers after he repeatedly declared he couldn’t breathe. Anna, who was sexually assaulted on her upstate NY college campus last September, regrets even reporting the rape. Chicago has become a war zone with 11 people killed and about 60 wounded in shootings over the Fourth of July weekend.

The Purge is alive and well now if no one is held accountable for their crimes or so many crimes go unsolved.

Horror movies are the biggest bang for your buck in the movie industry. They are inexpensive to make and still attract box office record type of crowds. The first Purge cost $3 million to create but made $89 million in box office revenue. Other scary flicks like Paranormal Activity: The Marked Ones had a $5 million budget and surpassed that by grossing $90.8 million in the theaters. The Saw and Insidious movie series we’re by far the most successful mainstream horror movies. Both original releases, Saw (2004) and Insidious (2010) only had $1 million budgets.

4 STARS: While the movie was slightly gruesome, the Purge Anarchy opens your eyes to two most-relevant horrors: political power and societal chaos. What would you do #IfThePurgeWasReal? 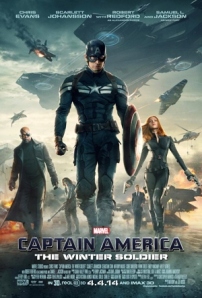 Anthony Mackie chronologically gets better with every movie. It is hard to believe that the same slinky guy who played “Papa Doc” from 8 Mile (2002) would Marvel’s first Black superhero. He is outstanding, persuasive, and balanced. Mackie’s recent increased number of acting gigs is evidence that he is competition now. Typically, we see the same Black actors and it is refreshing to see some different, long-lasting faces.

The fighting scenes are superb! Minutes in the movie some of the best combating occurs and it consistently continues throughout the movie. The choreography, timing, and precision with the fighters is multi-dimensional and believable.

I have always been a light Scarlett Johansson fan. Since ‘Her’ (2013), I have placed the red head on an idealistic pedestal. Merely her voice was featured in the winter movie, but in Captain America: The Winter Solider, the audience gets a glimpse of everything (well not everything). Johansson is drop dead gorgeous. Her beauty is only a drop in the bucket compared to the effort she spends on screen acting. Johansson was fierce as Black Widow.

The movie’s initial Captain American uniform looked like when Marla Gibbs concocted a homemade superhero uniform for Robert Townsend in The Meteor Man (1993). I am not quite sure if Marvel was going for a vintage look, but it surpassed the thrift shop sale rack. Although the uniform is microscopic compared the rest of the elements, I thought a brand new, shiny Captain America suit would be the least expected.

Any movie more than two hours is a mini-series. I should not be subject to endure more than 120 minutes without the option of pausing or stopping the movie. Captain America: The Winter Solider was too long and I have identified the long movies as a trend previously. Give me 110 minutes, a cliff-hanger ending, and I’ll patiently wait until the next film. The movie should have had some more deleted scenes for the DVD.

As a mother of a 6-year-old boy, I think I am forced to familiarize myself with the comic book affairs of Captain America, The Avengers, and any other supernatural human being. But, please do not proceed by quizzing me on the origin of any superhero, villain, or storyline because I literally watch the movie. I do not follow the superheroes. I am intrigued to find out more information about Marvel’s first Black superhero, Falcon, who was created in 1969.

3 STARS: The movie is too long but I suspect it’s the perfect length for all superhero and Captain American fans. Scarlett Johansson and Anthony Mackie got more points with me and the fighting was on point. Plans for Captain America part 3 are in the works now and the movie is slated to be released in 2016. In the meantime, you can catch Captain America: The Winter Solider this weekend in theaters.