Set in a suburban fantasy world, Disney and Pixar’s “Onward” introduces two teenage elf brothers (voices of Chris Pratt and Tom Holland) who embark on an extraordinary quest to discover if there is still a little magic left out there. Pixar Animation Studios’ all-new original feature film is directed by Dan Scanlon and produced by Kori Rae—the team behind “Monsters University.” “Onward” releases in theaters on March 6, 2020.

Movie Scene Queen, Disney, and Pixar are hosting a special screening on Monday, March 2, 2020 at AMC Waterfront 22 at 7 PM. Family four packs to catch the advance screening of Onward are available.  All you have to do is comment below with the last Disney movie you’ve seen.

Dolittle stars Robert Downey Jr. with an ALL-STAR voice cast of supporting actors. After losing his wife seven years earlier, the eccentric Dr. John Dolittle (Downey), famed doctor and veterinarian of Queen Victoria’s England, hermits himself away behind the high walls of Dolittle Manor with only his menagerie of exotic animals for company.

Frank Adler (Chris Evans) is a single man raising a child prodigy – his spirited young niece Mary (Mckenna Grace) – in a coastal town in Florida. Frank’s plans for a normal school life for Mary are foiled when the seven-year-old’s mathematical abilities come to the attention of Frank’s formidable mother Evelyn (Lindsay Duncan) whose plans for her granddaughter threaten to separate Frank and Mary. Octavia Spencer plays Roberta, Frank and Mary’s landlady and best friend. Jenny Slate is Mary’s teacher, Bonnie, a young woman whose concern for her student develops into a connection with her uncle as well.

MSQ is screening GIFTED on Monday, April 10th at 7:30pm at the AMC Waterfront 22.  Please comment below with your favorite Octavia Spencer moment.

The biopic depicting James Brown’s life as the Godfather of Soul, Get On Up, will be available on Blu-Ray and DVD on January 6th, 2015. Movie Scene Queen is giving away a handful of DVDs! 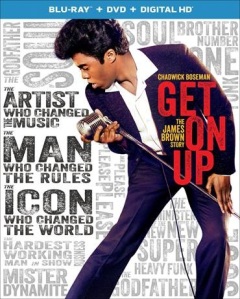 Rated PG-13, Get On Up stars Chadwick Boseman in yet another career-making performance as James Brown, with a stellar supporting cast that includes Oscar®-nominee Viola Davis, Oscar-winner Octavia Spencer, Nelsan Ellis, Oscar-nominee Dan Aykroyd, Craig Robinson and Jill Scott. James Brown’s ferocity, talent and ambition propelled him from his hardscrabble South Carolina roots to some of the most prestigious musical venues in the world, earning him a reputation as “the hardest working man in show business.” Get On Up takes audiences behind the scenes of his brilliant, six-decade-long career for an uncensored look at the turbulent forces that drove the legendary performer.

Please comment below for an official entry. Winners will be announced on Friday, January 9th.

And the winners are…

Comment below with your favorite James Brown song for a chance to win tickets to see his biopic, Get On Up.

In his follow-up to the four-time Academy Award®-nominated blockbuster The Help, Tate Taylor directs 42’s Chadwick Boseman as James Brown in Get on Up. Based on the incredible life story of the Godfather of Soul, the film will give a fearless look inside the music, moves and moods of Brown, taking audiences on the journey from his impoverished childhood to his evolution into one of the most influential figures of the 20th century. Boseman is joined in the drama by Nelsan Ellis, Dan Aykroyd, Viola Davis, Craig Robinson, Octavia Spencer, Lennie James, Tika Sumpter and Jill Scott.

The screening will be held Wednesday, July 23rd at South Side Works Cinema beginning at 7:30 PM.

New Year’s Day 2009 there was a lot of buzz about the wrongful death of 22-year-old Oscar Grant. After a night of New Year’s partying with friends, he was shot by a White Bay Area Rapid Transit (BART) police officer on the Fruitvale Station platform in Oakland, California.

Produced by Forest Whitaker, Fruitvale Station, starring Michael B. Jordan and Octavia Spencer, is a poster child story of life and redemption. The movie opens with the cold, chilling cell phone footage of the early morning accounts of what happened at the Fruitvale Station.

The jagged video set the tone for the entire movie because even without prior knowledge of Oscar Grant (Jordan), you knew that after 90 minutes you would be equipped with all you needed to know.
This Sundance Festival favorite sheds light on the reality that an unarmed Black man was gunned down by a White transit police officer in front of dozens of witnesses.

Oscar Grant’s mother, Wanda Johnson (Spencer) celebrates her New Year’s Eve birthday with her family every year. 2009 was no different. For her birthday in 2008, she had to visit her son in a local state prison but that was all behind her now. Her birthday was spent with loved ones including Oscar, his girlfriend Sophina (Melonie Diaz), and 4-year-old granddaughter, Tatiana (Ariana Neal). Once the birthday party was over, Wanda advised Oscar to take the train that night declaring there would be a lot of New Year’s Eve traffic. Oscar took his mother’s advice and it would be advice she would regret for the rest of her life.

It’s virtually impossible for viewers to take their eyes off of Michael B. Jordan. As he embarks on this powerful role, you can’t help but to feel as if you’re on the subway platform too. It seems as if Jordan studied Oscar Grant to perfect his every move by showcasing his strength to fight for family and the sensitivity of losing his job and kicking old habits. There’s no doubt that Jordan was meant for this role. Beyond physical similarities, Jordan effortlessly takes of the unfortunate narrative of Oscar Grant’s last moments.

Accused of murder BART police officer Johannes Mehserle claims that he thought the weapon he drew was a Taser. Instead, he drew a pistol firing the shot which killed Oscar Grant. Today, after serving less than 2 years for Grant’s death, Mehserle is free on parole.

In the wake of the Trayvon Martin verdict, it’s evident that we have to be mindful that race still plays a rampant role in social injustice and equality. Regardless of the shooter’s race, shooting victims cannot be dismissed because of judicial loopholes, accidental claims, racial provocation, or authoritative position.

On a lighter note, there’s always a connection to Pittsburgh. In the movie, before leaving out for his New Year’s celebration, Oscar asks his uncle who he thinks will win the Super Bowl. His uncle replies, “The Steelers!” After family members questioned his loyalty to the Oakland Raiders, Oscar uncle’s rebuttal was simple: The Pittsburgh Steelers were going to win the 2009 Super Bowl because they had black uniforms, with Black players and a Black coach who was married to a Black woman. In 2009, the Pittsburgh Steelers did go on win that year’s Super Bowl by defeating the Arizona Cardinals 27-23. It’s always a warm feeling to know that although Pittsburgh might not be a huge city, we’re still relevant!

5 STARS: The most powerful movie I’ve seen since A Time to Kill. The last day in the life of Oscar Grant is powerful enough to move anyone from solid to pure putty. This movie will leave you doubtful of justice yet optimistic and hopeful about leading a fulfilled life. Oscar Grant III wanted nothing more than to live a better life for his daughter. On a chilly California night on New Year’s Day 2009, fate gave him the exact opposite.