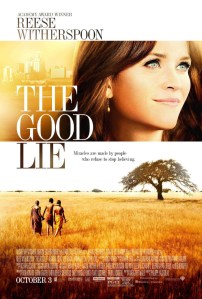 The Good Lie is a biographical film directed by Philippe Falardeau about the story of the Lost Boys of Sudan. Starring Reese Witherspoon, Arnold Oceng, Ger Duany, Emmanual Jal, Corey Stoll, and Sarah Baker, the film features Witherspoon as Carrie Davis, a staffing agent who helps Sudanese refugees relocate to the United States.

While roughly 2.5 million people were killed during the Second Sudanese Civil War (1983–2005), the Lost Boys of Sudan- groups of over 20,000 boys who were displaced and/or orphaned- took their chances of relocation to the United States with a lottery. Paul (Jal), Jeremiah (Duany), Mamere (Oceng) and their sister, Abital (Wiel) were lucky enough to get on the list.

Their inevitably challenging transition shows the difficulty of simultaneously adapting to American customs, getting a job, daily living as an immigrant, and coping with the trauma from their previous experiences. That is no easy task!

The true stars are not the big Hollywood actors like Reese Witherspoon or Corey Stroll, but the actors who played Sudan refugees. Emmanuel Jal, Ger Duany, Arnold Oceng and Kuoth Wiel are actual Sudanese refugees. It was clear that the actors used their firsthand knowledge and accounts to effortlessly excel in these roles. They were compelling, convincing, and remarkably powerful. To see real Sudanese refugees tell their stories through this movie was the most rewarding experience.

The Good Lie is a tearful journey and carefully illustrates the horrific scenarios young Sudanese children experienced. Equally important, the movie provides hope for all.

PBMF President Tory Parrish thought the movie provided “insight into both the brutality of war and the resilience of the human spirit. It’s a thought-provoking film that stays with the viewer well past the duration of the movie. It was sobering and heartening.”

Sheila Beasley, the organization’s Soul Café Subcommittee Chair, attended the movie screening with her mother. “The movie, The Good Lie, was a great story that needed to be shared to bring awareness to the horrendous journey of Sudanese refugees and the nuances settling to American culture. This movie stays with you!” says Beasley.

4 STARS: As Americans, I believe we so easily overlook the more sensitive needs of less fortunate countries. The Good Lie not only opens blind eyes to the destruction and civil war aftermath in Sudan, but the movie also sheds light on the need of compassion for others- regardless of race, sex, or economic status.