Movie Scene Queen will be screening Furious 7 on March 31st at the AMC Waterfront 22, beginning at 7:30PM.  For tickets, please comment below with your favorite Fast and Furious moment.  It shouldn’t be hard because you have six action-packed movies to choose from.  Good Luck!

In one of Paul Walker’s last cinematic performances… 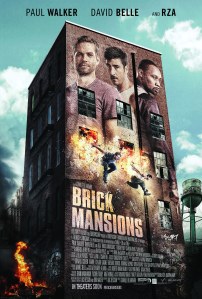 In a dystopian Detroit, abandoned brick mansions left from better times now house only the most dangerous criminals. Unable to control the crime, the police constructed a colossal containment wall around this area to protect the rest of the city. For undercover cop Damien Collier (Paul Walker), every day is a battle against corruption. For Lino (David Belle), every day is a fight to live an honest life. Their paths never should have crossed, but when drug kingpin Tremaine (RZA) kidnaps Lino’s girlfriend, Damien reluctantly accepts the help of the fearless ex-convict, and together they must stop a sinister plot to devastate the entire city. With stylized action featuring thrilling Parkour stunts (David Belle is the co-founder of this physical training discipline), Brick Mansions puts an entertaining twist on the action genre. The film is opening on Friday, April 25th.

The Movie Scene Queen is hosting a special screening of the movie on Wednesday, April 23 at 7:30PM at the South Side Works theater. For two tickets, please comment below with your favorite Paul Walker moment.

With MSQ’s one year anniversary, January was hectic! But, I didn’t forget about the throwback movie series!

To be young, spoiled and completely clueless… 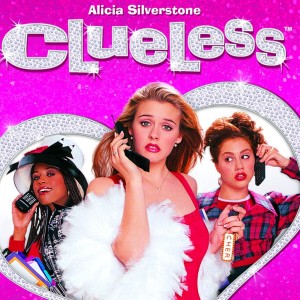 Cher (Alicia Silverstone) was surrounded by limitless credit cards and obnoxious friends when she decided to mentor a misguided new girl at her high school. As the most popular girl in school, Cher had to play therapist with her best bud, Dionne (Stacey Dash, and her thuggish boyfriend, Murray (Donald Faison), get her new friend,Tai (Brittany Murphy) accumulated to the Beverly Hills lifestyle, and manage a rocky, unexpected love life with her stepbrother, Josh (Paul Rudd).

The movie is an absolute classic! From Cher thinking Billie Holliday was a man to her horrible attempts at baking a fully intact roll of cookie dough, she was the ditsiest teenager ever. But draped with style, daddy’s fortune, and good intentions, it was hard not to love her.

The first time I watched Clueless I was 8 years old and while most of the things went right over my head, I enjoyed the high school perspective. I thought Cher’s days of changing her grades, setting up lonely teachers, and delivering idiotic debates were a universal high school experience. As I got older, my understanding of the movie evolved; figuring out a what “you-know-what” is, “Rolling with the Homies” is a real song, and Cher was a social pot-smoker.

There was a brief TV show based off of the movie and it was horrible. It featured the same exact cast from the movie except for Cher – Rachel Blanchard – and every episode was dumber than the previous one. The unpopularity of the show was a direct results of the show’s cancellation after 62 episodes. If Alicia Silverstone was on board for the TV show, I’m sure the show would have been better received.

Nevertheless, I’m still partially damaged because I can not locate my VHS copy of Clueluess. But no fear! The Walmart $5 bin is near… 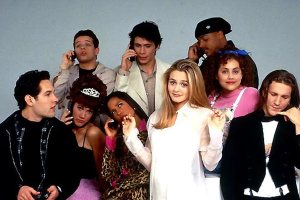 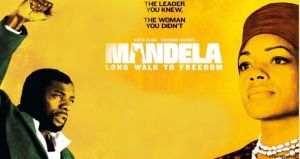 Idris Elba and Naomie Harris as Nelson and Winnie Mandela is a match made in heaven. Elba, who was recently nominated for Best Actor by the Golden Globes for his role in Mandela: Long Walk to Freedom, is strong and poised, and with the spot of makeup magic, gave the audience an intense snapshot of Nelson Mandela from a young lad to a senior citizen. Whereas, Harris is feisty and mild tempered as the former First Lady of South Africa. Both actors portray the couple as they had studied their behavior and work for a long period of time.

As expected, the movie was long. Although worth it, I wonder why the movie focused a great deal of time on his first marriage and his promiscuous ways. I know all leaders are not perfect and hold their own flaws. But the focus on that particular part of his life was not detrimental to story line. I wish the movie would have shed light more on the work he did once he was elected president in 1994.

On December 12th, Movie Scene Queen hosted a special screening of the movie and invited Pittsburgh Public Schools students and District leaders. Student members of the African American Center for Advanced Studies (AACAS) Executive Committee, a group of PPS Black gifted students, and young African American men a part of the WE PROMISE program, a District initiative to mentor male students and help them obtain the Pittsburgh Promise, were in attendance.

“The only thing I knew about Nelson Mandela was that he fought to end apartheid and spent 27 years in prison. Everything else that happened in the movie, I never knew” says AACAS executive committee member and Brashear High School junior, Makeda Drew, 16.

Drew and roughly 40 other students spent 139 minutes learning the multi-layered story of Nelson Mandela. “I think it’s important for us to be exposed to a great leader. The movie was inspirational to see what changes one man could accomplish because of what he believed in,” says Drew.

The movie has already seen cinematic success in South Africa. According to Box Office Mojo, the movie debuted at #1 during its opening weekend (November 28th release date) and has currently grossed an estimated $1.2 million.

4 STARS: In addition to the many local initiatives in Pittsburgh to honor Nelson Mandela’s life and legacy, let’s maximize on this holiday break and support this movie. Mandela: Long Walk to Freedom is a must see for everyone. 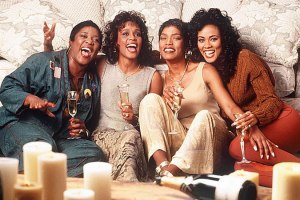 Now as an adult, the 1995 classic Waiting to Exhale makes more sense! The unfair rules of the game called love. The awkward dating scene. The struggles of being the other woman. The hectic life of single motherhood. The regretful dark clouds of abortion. The overall uncertainties, unfortunates, and inconsistencies of love would drive any woman insane. In Forest Whitaker’s directing debut, Waiting to Exhale, based off of the Terry McMillan novel, follows four women whose friendship becomes stronger as they battle a rough year.

Savannah- The Settled One
Played by the late Whitney Houston (RIP), Savannah Jackson was the typical successful Black woman; over consumed with her hectic life as a TV producer. Savannah’s love was often put on the back burner making her career superior. She settled for the occasional love of a married man, Kenneth (Dennis Haysbert- you know the Allstate Insurance man “Are you in good hands?”). Kenneth used his sick wife and young daughter as an excuse to remain in his martial commitment. In the end and against her mother’s advice, Savannah left Kenneth while supporting her friends in their own searches for love.

Bernadine- The Hurt One
Played by Angela Bassett, Bernadine Harris had it all until after 11 years of marriage she was confronted with a cheating husband, messy divorce, and single motherhood. Equipped with all the right qualifications to have her own career, Bernie was stuck with no financial resources to care for her home. Her biggest realization was the fact that her former husband was already shacked up with another woman and no longer the sole provider of her family. Bernie had to make a safe balance between caring for her children, reconciling the broken pieces of her heart, and identifying the resources to properly finance her newly constructed family.

My favorite Bernie scene was when she met James Wheeler (Wesley Snipes) in a hotel bar after a day in divorce court. All too many times when I’m traveling on business I find myself being James Wheeler; a person in foreign places meeting complete strangers but relating to them on many different levels. I’ll admit I’ve never (and I mean never) then spent the night wrapped in that stranger’s arms. But how simply sublime would it be to gravitate to someone you’ve never meet before in the matter of minutes.

Robin- The Broken One
Played by Lela Rochon, Robin Stokes, similar to her friend Savannah, was a successful executive who was in love with another woman’s husband, Russell (Leon). Dealing with post-abortion syndrome, Robin yearned for her ideal family and in the movie, you see Robin wasting her time with several men in hopes to snag her own husband. Like most of us women, Robin has a hard time letting Russell go knowing he’s the root of all her relationship problems. In the end, Robin finds the most “peace” with giving up that “piece” of her life.

Gloria- The Reasonable One
Played by Loretta Devine, Gloria Matthews was a beauty shop owner and single mother of a teenaged son, Tarik (Donald Faison). She falls madly in love with her next door neighbor, Marvin (Gregory Hines). Marvin quickly eased Gloria’s fresh wounds after finding out that her ex-husband was gay. Out of the four women, she’s the most reasonable one spewing helpful, realistic advice to her three female friends.

Overall, I love the way African American women were depicted in this film. Sexy & Successful! We’re not all married or all on welfare. Yes, we have our flaws but we create a diverse balanced group of beautiful creatures. The movie was praised for having an all-Black cast and being well received around the world. Well there were two White women in the movie; (1) the little girl who was performing oral sex on Gloria’s son and (2) Bernie’s husband’s mistress who was eventually pimp slapped in the middle of the board room. (But who’s keeping count!)

The Soundtrack
My hope is to eventually expand this blog to cover music as well as movies because Waiting to Exhale was a double pleasure; great movie and an even better soundtrack. I was recently in Boston and I listened to the Waiting to Exhale soundtrack from beginning to end. The soulful soundtrack brings back sweet yet sour memories of the any person you’ve ever loved intimately. What other soundtrack was originally produced and written by legendary music mogul Babyface featuring greats like Whitney Houston, Chaka Khan, TLC, Brandy, CeCe Winans, and Toni Braxton? The greatness was all captured on one little CD. It’s a classic!

4.75 STARS: Any woman can relate to the turbulent ride of being with any man. RIP Whitney Houston

This blog post is dedicated to the ONE, who out of all the HIMs, took a piece of me and still kept it! 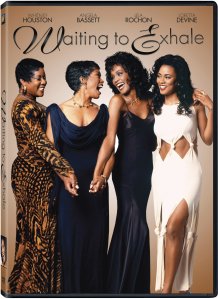